“Joining the Instructional Design e-Learning project (IDEL) was a career high point for me, and traveling to Jordan was a trip of a lifetime,” said Kristen Treglia, Fordham IT Senior Instructional Technologist. She recently joined a team of seven international experts in the areas of curriculum design, blended learning, pedagogy, and educational technology who traveled together to Amman, Jordan, in late 2019. They spent 5 days training Jordanian educators to design blended learning courses with digital tools.

The United Nations High Commissioner for Refugees sponsored the project, with the full support of the Jordan Ministry of Higher Education and Scientific Research. Kristen explained that the initiative, which is ongoing, focuses on creating “quality online education for Jordanian students and refugees. It’s the first step toward a scalable model for other countries in the region and around the world.

“Education changes lives. This program allowed me to use my expertise in online learning to create learning opportunities for Jordanian students and refugees,” she explained. The Jesuit mission of cura personalis and a passion for education contributed to Kristen’s motivation to participate in the program.

Kristen met her team in September 2019, when they gathered for a three-day working session in upstate New York. They continued their collaboration online for the next few months to prepare their project. The day after Thanksgiving, Kristen took a 25-hour flight to Jordan, where the team assembled.

The following link leads to a 3D model of Bloom’s Taxonomy from the work of his students; Anderson and Krathwohl. #OLJordan https://t.co/R90ebuqHSj

Participants followed a strict agenda for the week-long event. Each day was structured around 6-7 training sessions run by one or more facilitators. Kristen’s instructional topics included coaching Jordan’s e-learning community, social tools, and infographics. Jordanian educators attending the conference used their new skills with digital tools to create the first module for a course, which they presented at the end of the week. Kristen emphasized that this event was a learning exercise, but also much more than that: It put knowledge into practice to be shared with others.

Kristen departed Jordan feeling deeply inspired by her team and the Jordanian teachers. She says she learned just as much from the faculty as they learned from her. In addition to Fordham University, other institutions represented included the Yarmouk University and Princess Sumaya University for Technology. 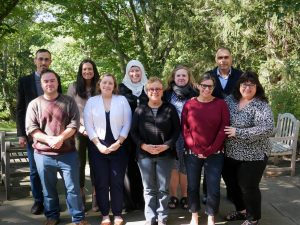 Kristen Treglia (second row, second from left), with her team

Kristen’s trip also included unique cultural experiences. She had the opportunity to visit the Dead Sea, Mount Nebo, and Cairo, in addition to embracing traditional food in the region. Jordan is a predominantly Muslim country, and Kristen enjoyed hearing the “absolutely beautiful voices singing the call to prayer” from the mosques during the day. Jordanians also demonstrated great respect for other cultures. The day after she and her team arrived, the hotel decorated its space for Christmas for its Western patrons.

Kristen says she is “honored and awed to be a part of this project. Education changes lives, and to be a part of a project of this scope, one that will affect so many lives, is an incredible opportunity.” Moving forward, she will remain involved in the program. As the IDEL team secures more funding, they will continue their focus on the greater global good by improving education at the margins.